Home » Features » The Best Air-Cleaning Plants For Your Home

The Best Air-Cleaning Plants For Your Home

Did you know: plants do a lot more for the air besides giving us oxygen. As houseplants absorb moisture from the air (a process known as transpiration), they filter out all sorts of polluting air particles such as mold spores, fecal matter (not kidding), and common household air chemicals such as formaldehyde and benzene, both of which are carcinogens and commonly given off by our normal household products like the glue used in the making of kitchen cabinets or treatments used in the making of upholstery fabrics. All of these things can commonly be found in the air of homes, but luckily, there is a low-budget option for keeping your home air clean that also has been found to contribute to positive mental health. That’s right; houseplants!

Any houseplant can improve your air, however, there are several that have had the good fortune of being studied and are now known to be extremely efficient for their jobs. Here are our picks, based on these studies and other information we’ve found about plants, for the very bests options to add to your home. (Remember though, these are only the plants that have been studied; if you find a plant you love that hasn’t been studied, get it anyway! Chances are good it will be beneficial, and if nothing else, you know it will give you more oxygen during cold winter months when opening the windows isn’t on your daily to-do list.) 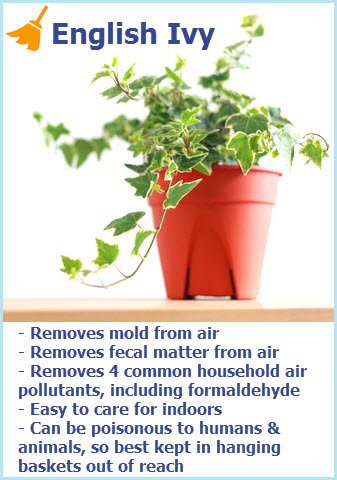 This plant is our number one pick because not only has it been wildly successful in various studies, it’s also extremely easy to care for indoors. A study by the ACAAI (American College of Allergy, Asthma & Immunology) put English Ivy into two containers: one that also contained moldy bread and another that contained dog feces. In only 6 hours, the ivy was found to have removed over 60% of the pollutants (specifically mold spores and fecal matter) from the air of each container. If you have any light at all in your bathroom, this plant would be ideal in there (and if not, there are plant lights you can get to simply attach to the planter so plants are able to live even in dark windowless rooms now). English Ivy was also studied by NASA and found to be one of the best performers of the plants studied, removing four out of five common home air pollutants that were studied, specifically formaldehyde, xylene, benzene, and trichloroethylene.

Due to it’s easy-to-care-for nature, English Ivy is ideal for any room of the house. English Ivy is considered a low-light plant, draught-tolerant plant, so it’s a good choice for anyone with a black thumb for gardening. However, before you set this plant next to your gassy labrador’s bed, you should know that the ASPCA has listed English Ivy as toxic to dogs, cats, and horses, so keeping it out of reach from pets by putting it in a hanging basket would be best. Touching this plant isn’t recommended for humans either, so be sure to keep it away from tiny children and your own hands as well as it could cause a rash or other dangerous side effects, including trouble breathing. 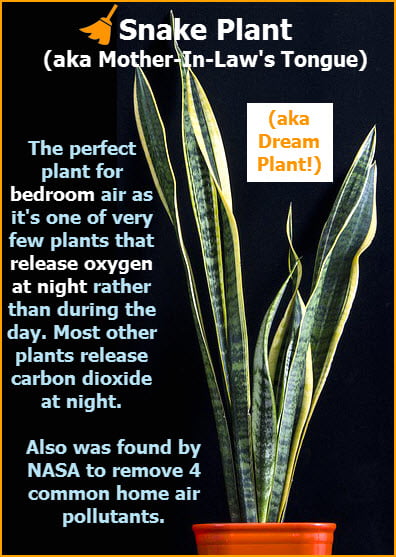 The Snake Plant, also known as Mother-In-Law’s Tongue, or as we would prefer to call it, the Dream Plant, was also studied by NASA and performed the same as English Ivy removing the same four out of five common home air pollutants that were studied: formaldehyde, xylene, benzene, and trichloroethylene. However, this plant has an extra special characteristic that has landed it as number two on our list: the dream plant is one of very few plants that is known to release oxygen at night, rather than during the day like most other plants. Due to this, plants in the bedroom typically aren’t ideal as they too will be releasing carbon dioxide while you sleep, though thankfully they won’t be adding snoring to it as well. However, the Dream Plant is unique among houseplants in that it can be placed directly next to your bed and will clean away your carbon dioxide while you sleep and provide you with increased oxygen in your airspace.

There are a number of health benefits that have been found from increasing oxygen during sleep, including improving sleep and reducing the risk of health problems that are caused by low blood oxygen (known as hypoxia). Obviously sleeping next to a plant will not yield the same benefits as an actual oxygen machine, however, according to the Lung Institute, just 6-8 of these Dream Plants are enough to provide the oxygen supply for one person in a sealed room when they have grown to waist-high, so any Dream Plants added to the bedroom will have a positive impact on your nighttime oxygen supply. 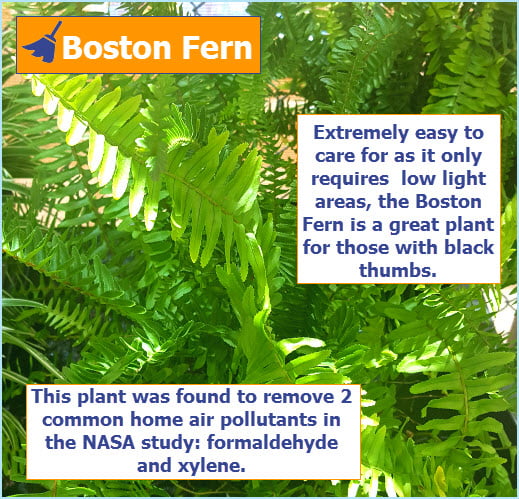 This leafy plant is number three on our must-get plant list as it is extremely easy to care for. Almost every home has a dark corner somewhere, and the Boston Fern would be perfect to improve that space as it requires very little light. It is a water-loving plant, so be sure to give it a drink regularly, however it won’t immediately start complaining if you forget for a week or more. Although not a top performer in the NASA study, the Boston Fern was found to remove two common air pollutants: formaldehyde and xylene. Paired with it’s ability to survive in low light rooms, this plant is definitely a good pick for a home. Although xylene is not a carcinogen like formaldehyde and other chemicals in the NASA study, it has been found to cause headaches, depression, insomnea and other negative health problems, so removing it from the air as much as possible is absolutely benefical for home air health. 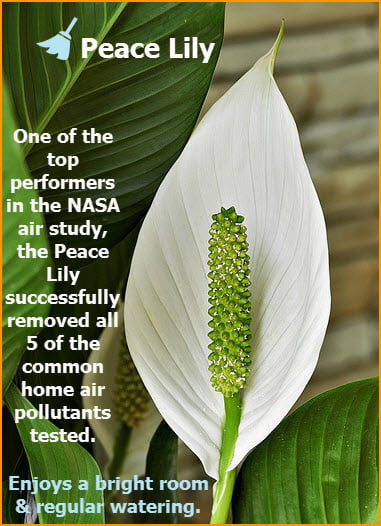 The Peace Lily was one of the top two performers in the NASA study on air cleaning plants, removing all five of the common air pollutants tested: formaldehyde, xylene, benzene, trichloroethylene and ammonia. Although this plant does need to be in a room with bright light and recieve regular watering, it can live indoors for many years if well cared for. As always, it’s important to research any plany you bring into your home if you have pets, and the Peace Lily is no exception: this plant is listed by the ASPCA as being toxic to dogs and cats, so be sure to keep it well out of reach of your animals if you want to add it to your home. 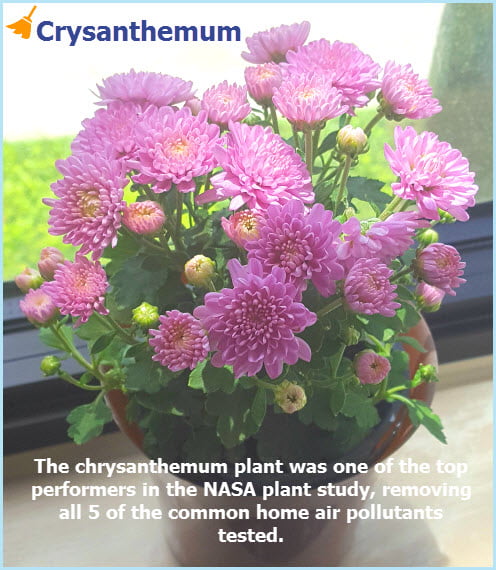 These colorful flowering plants were the other top performer in the NASA study along with the Peace Lily, also removing all five of the indoor pollutants studied. Similar to the Peace Lily, crysanthemums also require very bright rooms and regular watering, though this plant loves water so much that several waterings per week would be ideal. However, capable of growing several feet tall and wide, these flowering shrubs can make a big impact on your home decor as well as your home airspace. Adding a few tea bags to the planter can help the flowers maintain their bright colors.

In order to optimize the benefits these plants can provide for cleaning the air, NASA recommends having 2 plants that are in 6-8 inch pots for every 100 square feet of home space. With so many great plants listed here, that means you can (and should!) try to incorporate at least one of each into your home. With so many different varieties as well – vines, leafy plants, flowery plants of various colors, etc. and of course all the different styles of planters to go with – incorporating them into your decor can be easy and fun. Below is the full list of plants mentioned here for quick reference. 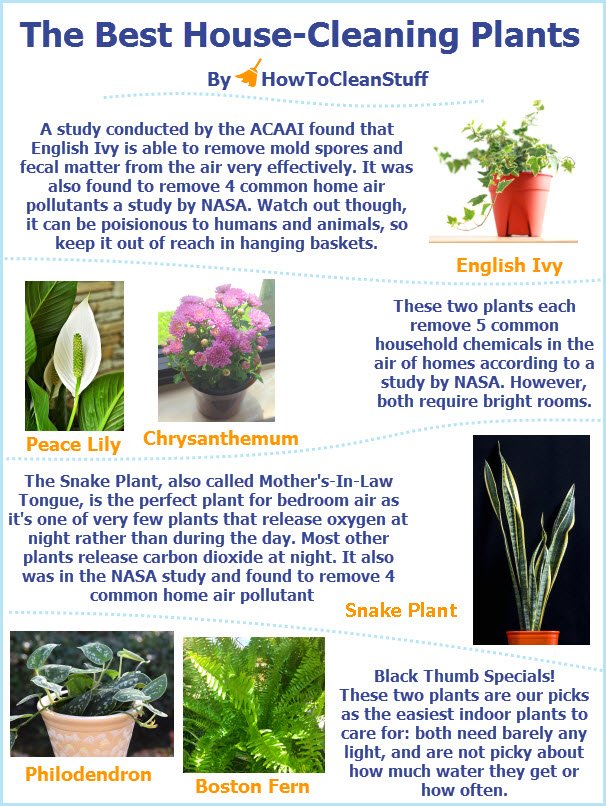