Home » Features » Getting Your Spouse to Clean Up After HIMself 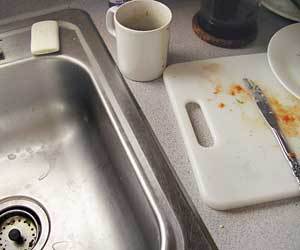 I’m sure some perfect Suburban princess will take a glance at this and say, “Just ask him nicely.” But, c’mon, you know you’ve tried it and it didn’t work. That’s why we’re here. Your man doesn’t listen. Chances are he was wishing you came with a mute button by your second date. Screw being nice, if you want the man in your life to clean up after himself, you need to play hardball. Here’s how.

Disclaimer: This guide is satirical.

The first thing you have to know to get your man to clean up after himself, is Man. Man needs three basic things to function happily and understanding these things will put you at an advantage. Need #1, (and I will add that the order isn’t going to be the same for every guy,) sex. Need #2, food. Need #3, AVEM or Audio-Visual Escape Mechanism such as television, video games, golf, etc. Don’t fool yourself by thinking that money and power is on his list of necessities. Guys want money and power to attract sex, and to buy food and toys. If getting needs met was cheap and easy, all men would be on your couch in dirty underwear, eating cereal and playing video games while you kneel before him waiting for his command to worship him in whatever way he saw fit. I think the only reason why men shower is because they enjoy having company from time to time; so, you see how much leverage you actually have?

Now that you know more about your man, you need your tools for dealing with this knowledge. We can’t beat them into submission, the human rights people would be all over us; and not too many of us have the upper body strength to carry out the task anyway. We can’t drug them or implant some sort of device into their frontal lobes, the human rights people and the police would team up to lock us away. We have to use what the good Lord blessed us with, incredible intelligence, and carefully craft the right plan. We have to barter, threat, and withhold. These tools are better than the phone books police use to interrogate their suspects without leaving a mark.

If the only reason you stay with your man is for him to open jars, kill spiders, and uh, reach that little itch that needs to be scratched; this section may not be for you. But for everyone else, you can use your tools on your man’s need for sex to get him to clean up his act. So, what is he doing? Dropping his dirty socks and boxers on the floor…right next to the empty hamper? You can barter with him. You can say, “Honey, if you’ll just pick up after yourself, I’ll do that thing you like me to do without it being your birthday.” Of course, you realize that if he does his part, you must do yours. So, be careful at what you’re offering. On one hand, you want to show him that you’re willing to do something you don’t like to do if he’ll do the same. On the other hand, you can just pick up his socks and be able to look yourself in the mirror the next day.

If the bartering doesn’t work, you’ll have to threat. “So help me, if you don’t start putting your clothes in the hamper, you’ll be a missionary man for the rest of your natural life!” If he can’t add some variety to his way of life, i.e. cleaning up after himself instead of making you do it, don’t give him variety in his sex life.

There is the possibility that he still won’t do his share in the relationship. You have to withhold sex. I know that makes it a little difficult on you sometimes. If he isn’t rolling off of you and into a deep slumber, you may have to talk to him until he goes to sleep every night. And you may have to take some matters into your own, uh, hands. But, hey, he isn’t helping out. He has to pay the price.

They say the way to a man’s heart is through his stomach for a reason, use it to get him to make your way to the bathroom mirror. You’re tired of having to throw all of your weight on the door to get in because his towel has somehow gotten wedged beneath. And then when you get in, you have to wonder how he could get toothpaste EVERYWHERE. Let’s not even talk about the toilet seat. So you barter, “Sweetheart, if you could just wipe out the sink in the morning, I’ll have a big breakfast waiting for you.” As with the sex, you’ll have to have that breakfast ready and waiting as promised. If you aren’t that great of a cook, this section may not be for you.

If you leave him at the table to inhale all the bacon and eggs and still have to fight your way into the bathroom, you need to pull the plate away. Threaten him, “that was your last mouthful of bacon ever, if you don’t go in there and clean up your mess.” He’ll look at you like you pulled a knife on him, but he’ll get up and do his duty because he’s still hungry.

Now, if your man is so stupid that he says he’ll get something on his way to work and leaves you hanging with his dirty dishes AND the messy bathroom. You’ve got to follow through with your threat and withhold the bacon. Cook every grease-popping piece and find someone to feed it to: the pet dog, the homeless man at the intersection, your co-workers. Just don’t let him eat it. You can go as far as to make yourself meals, clean up your own dishes, and leave him at the table with fork and knife in hand wondering why you’ve turned off the lights in the kitchen without bringing him dinner first. Or, you could scrape off all of the toothpaste he left and put it on his plate. “I told you, no more bacon!”

Did he dump his jacket, keys, and whatever else just where you asked him not to when he came home? Barter. “Why don’t you hang up your jacket and put your keys on the hook and we’ll watch what you want to watch tonight?” Just know that you may be watching monster trucks crush school buses for two hours.

You may have to threaten. “If you can’t help out around here, I’m going to take the remote control away! We both know you’ll never stand up to turn the channel!”

If that doesn’t work, withhold. You watch him drop his stuff and then you get his attention, “Hey! What did I tell you?” Pull the flowers out of the nearest vase and put the remote control in the water right before his very eyes. Then grab a book and sit down in his favorite chair to read.

Sometimes, you can make a simple statement that doesn’t border on bartering, threatening, or withholding. They’re suggestive statements that can be effective if you think quickly and execute them properly.

If the dishes are piled up and he’s giving you the “Babe, do you wanna?” look, you sigh and say, “I just hope I’ll have the energy to rock your world after I wash all of these dishes.” He’ll offer to rinse.

For the timeless question, “What’s for dinner?” You can respond, “Who has time to cook? I’m trying to clean this pig sty!” He’ll compromise with picking some things up for a tray of store-bought lasagna that should be done baking by the time you’re done cleaning.

When he can’t find the remote control, just suggest, “I don’t know, dear, maybe it’s underneath all of your stuff there on the couch.” It isn’t a definite, but he might put something away for some quality TV time.

If all else fails, you can kick him out and start fresh with someone else.